The results from the 2016 Enrollment Survey are in, and here's the bottom line: Camps had a good year as enrollment continued to rise. The majority of camps reported at least maintaining the same enrollment numbers compared to 2015, and, in many cases, they were higher. This enrollment trend is a sign we have recovered from the economic recession, but with strong enrollment comes new challenges. Camps now face issues with capacity, competition, and diversity.

Camp professionals who responded to the survey represented the overall ACA membership. A total of 311 camp directors responded anonymously to the 64-question survey that was available through ACA Now from September 2 to October 9, 2016. The summer camps in the sample varied in program type, ACA field offices/affiliation, and camp affiliations. The following data, charts, and graphs are based on camp directors' responses. These enrollment trends may not apply to every camp, but ACA hopes this information will help provide insight into the industry trends as a whole. Please note some percentages do not equal 100 percent due to estimation errors. 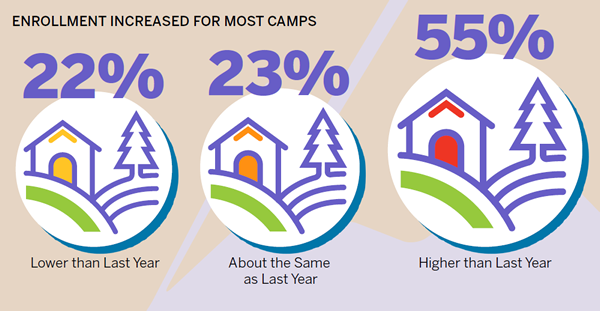 The survey results also showed that campers are returning. About 90 percent of camp directors reported retention was about the same as the prior year or higher.

Still, about 22 percent of camps reported lower enrollment compared to 2015. These responses came predominantly from summer camps located in the Mid-Atlantic compared to all other regions.

The economic downturn resulted in decreased camper enrollment in 2009. Camps continued to express economic challenges in 2012 with one director citing, "Still catching up from the economy — would like to get back to pre-2008 status quo." Since 2014, enrollment has reflected the trends established before the recession.

This is great news. The top enrollment issues for camps have shifted from economic challenges to capacity issues. One camp director mentioned, "We have more campers that want to attend than we have space for." However, this trend varies across the country. For example, camps in the Mid- Atlantic region, when compared to the South and West, continued to cite the economy as a factor negatively affecting their camps' 2016 enrollment. While it is important to pay attention to regional differences, overall, camp enrollment appears to be thriving like before the economic downturn.

Enrollment is High, but Only for Some Campers 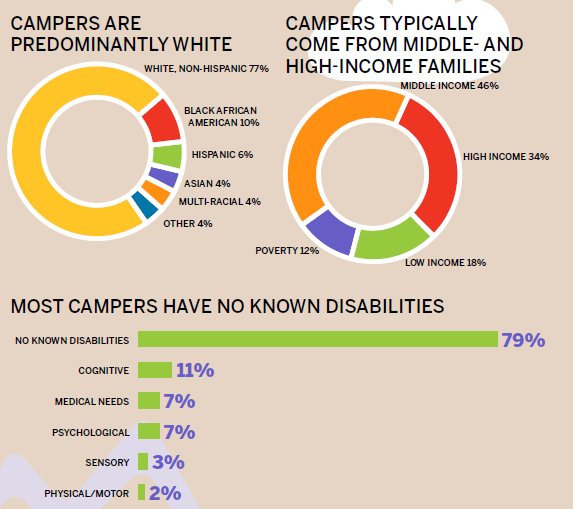 Each year, we ask survey respondents to describe the top two enrollment issues they faced during the past summer. Many of the issues camp professionals reported for 2016 are consistent with those mentioned in past years. The most frequently mentioned issues were:

We would like to thank each camp director who participated in the 2016 Fall Enrollment Survey. The trend information shared in this article was made possible by your willingness to participate in this study. We hope you will consider contributing your camp's information next year. The more camps that participate in the survey, the better the information we all will have to compare our individual experiences. For more information, please read the full report.

Enrollment highlights are prepared by Cait Wilson. Cait is the ACA Research Assistant and is pursuing her doctoral studies at the University of Utah.

There's a Camp for That!

How Do You Spur Culture Change at Camp?

Maintaining Perspective — Is There Still a Place for Camper Accident and Sickness Insurance in Your Camp Risk Management Plan?

Highlights of the 2016 Compensation, Benefits, and Professional Development Survey