First, I’d like to apologize to the camp directors who had to put up with me as a headstrong and, dare I admit it, know-it-all 18-year-old. To certain directors (you know who you are), please understand that when I painted the side of your arts and crafts building with colorful paint splatter and kids’ handprints, it was because the campers hated the nasty outdoor sink that was covered in spiders and looked like a rusting garbage can. Looking back, I can see that my frustration at their refusal to wash their paintbrushes did not give me the right to redesign your building — but please know that my heart was in the right place.

Fast-forward 25 years. Having now run camps in multiple states, been responsible for hundreds of acres and buildings, and been in charge of 120+ seasonal staff every summer, I would say to 18-year-old-me: “What on Earth were you thinking?” I now know exactly how much a 5-gallon bucket of oak brown wood stain costs and how many buckets it takes to repaint each building on site. I know precisely how many gallons of chrome green trim paint I need to make sure that all the buildings look clean, crisp, and well-tended. And no, the cost of extra paint and stain to cover failed redecorating by summer staff members is not included in my budget.

But before you roll your eyes and head on to the next article, be assured that this is not a “learn from me” sob story. It’s not a lecture, and it does not imply that you would ever think about doing something as misguided as painting someone else’s building without permission. Rather, it’s about helping you have a fantastic summer on staff and sharing some thoughts on how you can “paint a sink wall” in a way that will be appreciated and respected.

It’s All about Adding, Not Taking Away

Making a notable contribution to your camp this summer is a worthy goal. What’s important to recognize is the difference between adding something to your camp community — bringing your enthusiasm, talents, and interests and using those to better the camp experience for all — versus agitating for change because something isn’t being done the way you think it should be. Your advocacy should add to — not detract from — your contributions.

Let’s say you’ve come up with an amazing idea for a new evening program, which your supervisor promises to pass along. Boom — added value. But when your recommendation doesn’t get immediately scheduled, if you tell the camp leaders that they should replace the 50th Annual Talent Show (the very pride of the camp’s evening schedule) with your idea, because “competition is super outdated anyways” — that’s interference. Very much not a value-add. In addition, it implies that instead of being part of the team, you prioritize your own opinions over the traditions and expectations of the camp — all of which you knew about when you accepted a job there. You should never go into a partnership assuming you will be able to change the other side to make it work. (That’s good advice for lifelong relationships, too.)

A time may come this summer when you identify something at camp that could be going better. It may be a policy you think needs to change, a practice you think is outdated, or even a building that scares your campers, because it looks like a place where a horror movie was filmed. How you go about addressing that concern matters. So here are a few things to keep in mind as you head into the summer eager to be a valued member of your camp’s team.

Your Opinion Is Important, and There’s Also a Fine Line

We know you’re coming to camp excited about the opportunity and ready to give a lot of yourself to the role.

Balancing that, we know that while you come to camp for a short period of time, the challenges you identify while you’re here are likely things we’ve been dealing with behind the scenes for months (in some cases years). Camp directors need to make space to hear your concerns and listen to your feedback, and we also ask that as a seasonal member of the team, you understand that you may not have the whole picture. The excitement and passion you have for sharing your ideas could take a wrong turn if you just assume you have all the pertinent facts and details.

For example, with the benefit of hindsight and many years of experience, I can see that where I went wrong with the sink situation was in assuming that if I could figure out a way to fix the problems (as I saw them), that would automatically be appreciated. I didn’t have (and it wasn’t my job to have) the perspective or information to make that decision. My job was to take great care of the kids. I was dedicated to making their experience awesome, but knowing when to push for change and when to step back is a subtle line that we can sometimes cross without realizing we’ve done so.

If that happens to you, practice taking a step backward and accepting the feedback with grace. That’s a professional skill you’ll appreciate many times over in life. It’s also important that you don’t let it dampen your enthusiasm for doing your job with gusto.

You may have heard the expression “It’s better to ask for forgiveness than permission.” But at camp, where the care and safety of people has to be the priority, that’s dangerous thinking and the wrong approach.

Let’s say the campers in your cabin suggest that they would have more floor space to play games and to have a dance party if you would just move the bed that’s in the middle to that extra space under the big window on the back wall. So you redecorate. It only involves moving a bunk bed and three or four cubbies. There is space on that wall, and the setup looks better now. The dance party is epic. Where’s the harm?

Clearly, you have the best of intentions and believe that you are putting your campers’ interests first. (Admirable!) What you may not have is the knowledge of licensing requirements that mandate so many inches between the sides, head, and feet of beds. Or the fire code regulations, which require egress windows to be accessible with no furniture blocking them and electric panels to have a minimum amount of open square footage on the floor in front of them for emergency access. So you may be unprepared when your director calls you into the office because the health inspector has issued the camp a citation for safety violations during their inspection.

While you see the “tree” view of things, exactly what your role requires, your directors are responsible for the 500-foot “forest” view, which requires a balance between nurturing your input and maintaining oversight for the entire camp operation. So if you’re not sure if something is OK to do, always err on the side of asking first.

It’s OK to Pass Information On, Then Trust the Process

This summer, you may find yourself in possession of valuable knowledge that can help your leaders make good decisions about campers’ physical or emotional safety. Say that a camper confides in you that their mom is currently undergoing chemotherapy, which is why the camper has been so insistent about calling home to check in, even though they know it’s not camp policy. Bringing that information to your supervisor might change the way a policy is implemented for a particular camper or situation.

Similarly, if something affects the safety of campers or staff, if you learn that a colleague is having a tough time and needs help, or you become aware of a maintenance issue, that’s all information you should pass upward.

It may be that the camp director already knows and is addressing the issue. Or, in the hectic atmosphere of camp life, you may be the first person to see the problem. Either way, you don’t want to be the person who noticed and said nothing. You do want to be the person who trusts that their supervisors will use the information you’ve provided respectfully and handle the situation appropriately — even if you don’t see or hear about the result.

There’s a Time, Place, and Strategy for Giving Feedback “up the Chain”

In the course of your role, you may learn something that bothers you about the camp where you’ve committed to spending the summer. You may not like the way staff time off is configured or how co-counselors are assigned. You might even feel that camp leadership exists under an outdated understanding of a cultural consideration that’s important to you. So how do you know if it’s your place to say something when it’s not as cut-and-dried as a physical safety issue?

If you see something you believe needs systemic change, that’s a different kind of feedback than letting someone know that a fence latch is broken. Consider when such feedback is warranted and when your thoughts may best be heard. Stopping by the director’s office 15 minutes before the camper buses arrive for the day to mention that you have a suggestion on how to reorganize the weekly schedule is not going to be well received. A better plan is to ask a supervisor when would be a suitable time for you to share some feedback about a noncritical matter.

Unless a situation directly affects the safety of individuals in camp, it’s not typical for camps to make big changes in the midst of their busiest operational season. Instead, most camps build in time to evaluate systems, procedures, and policies in the off-season.

Picture a packed drive-through restaurant, cars lined up to the street, in the middle of lunch shift, and the manager announces, “We’re changing all the burgers to fish patties, even if it’s already ordered and paid for!” Mass confusion ensues. At the very least, people will get frustrated and demand their money back — what a mess.

Your camp has surely communicated expectations to families earlier in the year. In most cases, parents/guardians have already signed off on legal waivers and agreements. So it’s a much bigger deal than it may seem on the surface for directors to make changes once campers are on site. However, communications and forms can be adjusted ahead of the next season, and your director will have a chance to review your feedback before then.

Remember that I mentioned adding to the camp community? Critiquing your employer while they are trying to run camp is not necessarily doing what you intend, which is to contribute in a helpful manner. Your voice is important. Sharing honest feedback with suggestions in postcamp surveys or offering your support in the off-season by participating in reflections and planning retreats are great opportunities to contribute and be heard.

You were hired for a reason. And you’ve picked the specific job at the specific camp you did for a reason. You may have looked into and even interviewed at several places. When you chose this camp, it wasn’t because you thought it was perfect. You chose it because something about the camp’s philosophy for working with youth, their values, the type of community they build, or another aspect of the experience spoke to you. So this summer, in moments of frustration, or when you see a need for change, don’t lose sight of the big picture. You came to make a difference — in all the right ways — and perhaps to learn that you don’t always need to have all the answers. So do that. And have an amazing summer! 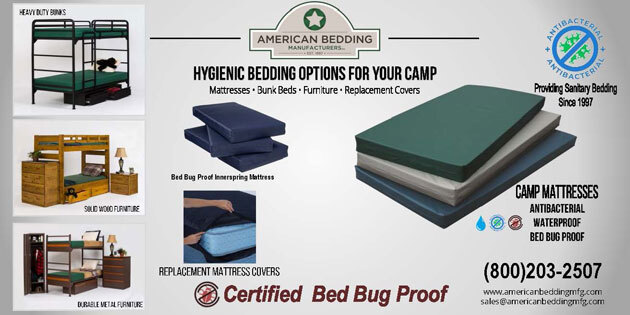