This article is part of Camping Magazine's series on social justice, exploring social issues in the context of individual camps and the camp community as a whole as a way to spark further conversation and inspire positive change.

You thought about working at camp, applied, got hired, and now you’re looking forward to creating positive relationships with campers all summer. We all know (and research shows) that positive youth-adult relationships are incredibly important building blocks for young people’s development. Growing up, you might have had an influential young adult or “near peer” in your life. Think about that person for a minute. Why did you like them? What did they do to influence or inspire you? Were they good listeners? Did it seem like they “got” you? Did they ever stand up for you?

This summer you have a tremendous opportunity to make a difference in the lives of children and youth. Did you know that you also can make a difference toward diversity, equity, and inclusion? You can! How? By being an ally to campers. Being an ally to campers means listening, noticing, reflecting, and taking action to change patterns of society’s injustices. Being an ally does not mean “saving” or pitying individuals or groups, or staying stuck in guilty and sad feelings about the way things are. In fact, the process of being an ally — allyship — is really just the start of a lifelong process of learning about patterns of injustice in our society. Of course, learning isn’t enough. Learning should lead to actively working to disassemble injustices while opening avenues for thriving.

Have you ever been worried about what to say if a camper says or does something that seems racist, sexist, or homophobic? Or what you would do if campers did or said something that seemed unintentionally dismissive or made someone feel self-conscious about their race, ethnicity, or gender? Some camp staff are afraid they might not know how to handle such situations. Yet, we all know that campers don’t leave oppressive attitudes or behaviors at the front gate, even if we’d like them to. Camp can be a place where children and youth learn from positive role models like you. Even better, campers can leave camp and go back out into the world emboldened to make a difference for others.

So, you’re committed to doing whatever you can to end the injustices in the world. Why might it be scary or hard to do this at camp?

We need to recognize these obstacles so we can try to overcome them and help each other as camp staff to look for opportunities to move beyond these hurdles.

Following is a chart outlining the structural relationship between agents and targets through categories of “isms”(see The Fabric of Oppression on page 24). The idea of “fabric” refers to a larger structure containing patterns made up of smaller ties or connections woven from individual threads. As you look at the chart, think about the agent groups and target groups to which you belong. You will probably see that you are a member of groups on both the left and the right side of the chart. Note that being a member of an agent group doesn’t mean an individual is bigoted, discriminates, or is guaranteed power. Likewise, an individual member of a target group isn’t automatically oppressed or suffering.

Following the chart are arrows that point to the consequences of the fabric of oppression. Consequences are reflected in the emotions, feelings, and experiences of both agent and target groups.

So, what should camp staff do? Following are some ideas to consider as you work toward developing positive relationships with campers and engaging in allyship. 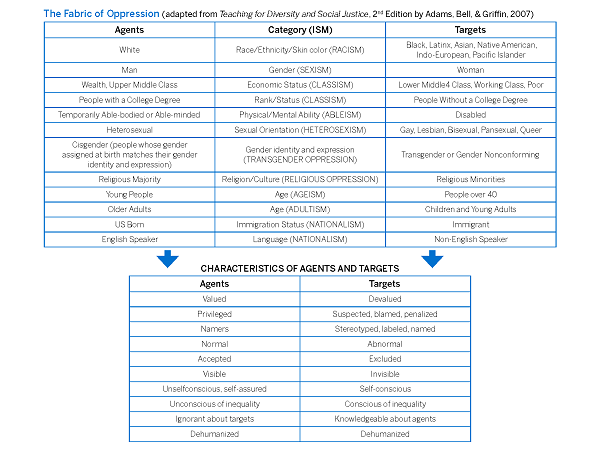 If you’re reading this and thinking that allyship might not be enough to change patterns of injustice and systems of oppression, you’re right! It takes thoughtfulness, listening, and reflection followed by action and hard work. It’s about doing this work not only to help others for their sake, but to take responsibility as an agent to make sure your group is doing all it can to ensure that all groups experience freedom and justice.

At camp, you have the incredible opportunity to not only make a difference in the lives of individual campers, but in the lives of people from target groups who have faced oppression. A lot of us wish the rest of the world was like camp. Camps can be a powerful learning experiences for children (and staff) who seek to create a world that is fairer for everyone, where everyone can thrive.

Author’s Note: Special thanks to Erin Buzuvis and Emily Billings.

Ann Gillard, PhD, has worked in youth development and camps for over 20 years as a staff member, volunteer, evaluator, and researcher. Ann also organizes Camping Magazine’s Social Justice Series. If you would like to propose an article for the Social Justice Series, contact Ann at anngillard@gmail.com.

The Camp Opportunity Now and in the Future

Mission, Vision, Values: Speaking to You, Speaking through You