Playwright, actor, and founder and CEO of the Hattiloo Theatre in Memphis, Tennessee, Ekundayo Bandele makes it clear that his mission is bigger than the theatre itself. The only freestanding Black repertory theatre in five surrounding states (Hattiloo Theatre, 2019), Hattiloo and its programs are engaging marginalized communities in Memphis and reaching individuals who love theater but may not historically have felt invited (Sparks, 2019). That includes his community’s Black tweens, who, along with their families and peers over the past few years, have experienced murder and violence against Black people, protests, and pandemic-fueled uncertainty.

Recognizing the profundity of these and other hardships and their potential long-lasting impact on developing psyches, this past summer Bandele launched a Self-Identity Camp for Black Youth. The goal of this day camp at Hattiloo was to use all the tools his theatre has to offer to encourage youth in the Black community to explore and express their feelings about their wants, needs, challenges, fears, triumphs — anything and everything that moves them and speaks to who they are as individuals.

First off, tell us a little bit about yourself and how you came to found the Hattiloo Theatre.

I’m originally from a small community in Brooklyn, New York. I am an only child, so creativity was my sibling. I always wrote and thought I would end up being up a novelist, but when I was in college, a professor gave me a book called Five Black Plays and encouraged me to consider playwriting.

I wrote my first play and produced it in 1992. I’m not going to say that it was a success, but I got to the concept and production. And from there I developed my craft.

Along the way I had a number of side businesses. I ran a vintage store called Threads, and I had a mobile carwash called Bandele’s Wash Works — and I always used to host open mic events so people could come and perform. And that’s where I met a man named Michael de Caetani. He asked me if I would be interested in opening a black civic theatre in Memphis, and so I did in 2005. That was Hattiloo.

What was the inspiration for the Self-Identity Camp for Black Youth that is going on at your theatre this summer? Why was it important to do this?

Because of the unrest that’s been happening for the past two years – the various murders that have been committed against unarmed Black people by police. These things have a profound effect on young people. And it’s at that tween age when kids really begin to develop their identities, who they’re going to be when they’re adults.

I wanted to give them an opportunity to develop some of the tools they need to explore what they’ve been feeling and to express those feelings.

Can you talk a little bit about the camp? What does the program entail?

The program entails writing skits, so creative writing, theatrical dance or movement, some hip hop and rap, because that’s what the kids are listening to — and a whole lot of roundtable discussions and taking what comes out of those discussions and turning it into a skit.

The camp is divided by gender, so one week for girls and one week for boys, to provide a safe space for them to share what’s on their minds. They may want to express things that they don’t feel comfortable sharing in mixed company.

I’ve always thought there is something very liberating about the theatre and taking on different roles. What do you think makes it a good vehicle for self-discovery?

Theatre actually encompasses all the arts: writing, voice, dance, singing, lighting, making props — even painting in the course of designing and building the sets.

It gives people a chance to choose the option for self-expression that best suits them. For example, you may have an individual who can’t sing or dance, but they can make a prop. And that prop can be an outward representation of what they’re feeling on the inside.

Theatre also has that aspect of community that can build trust. There is the physical act of blocking a play, being with others, and standing side by side, which builds a sense of closeness. And I believe, over time, that dialogue comes from that trust that is built — and that dialogue leads to self-expression.

What are you hoping the participants will get out of your camp? What tools do you want them to take away from the experience?

What I want to be able to do is increase their ability for self-expression. And the takeaway is that they have a voice. I want them to have used that voice and developed it through their camp experience. My hope is that this camp will enable them to express themselves with that voice at home and to bond with some of the other kids in their communities.

What do you think people of other racial backgrounds could do to be better allies for Black youth?

Partner with a culturally specific organization. Sometimes a predominantly white institution will say, “We want to do this kind of camp,” but I believe they lack the important nuances needed to really connect with Black kids. If they can partner with organizations of color, they can really achieve some of the diversity, equity, and inclusion initiatives that I see developing across the country.

Are there ways you think other summer camps — other theatre camps, other traditional summer camps — can better encourage Black youth who attend their camps?

Make space for them. Make certain that there is something at camp that represents them specifically. It can be something as simple as a cultural circle. You may have one kid who says, “Hey, I’m Jewish,” or a camper who says, “I’m Italian,” or “I’m Latinx.” The circle gives everyone a chance to talk about what they have in common. This is something that can easily take place at a campfire.

Do you have any plans to continue or expand your Self-Identity Camp for Black Youth in years to come?

Absolutely. It looks like this camp program is something that we’re going to do in every season. The kids are really responding well to it, as are their parents.

Anything else that’s on your mind about race relations, enabling self-expression, or today’s tweens that you’d like to share?

Trauma that typically rears its head during adulthood is first experienced during those critical tween years. Frederick Douglas said something to the effect of “It’s easier to build a strong kid than to repair a broken man.” We have to give kids an outlet to talk about that trauma now.

What advice would you give to kids who are just trying to survive in today’s climate?

This interview was conducted by Marcia Ellett, Camping Magazine’s editor in chief. 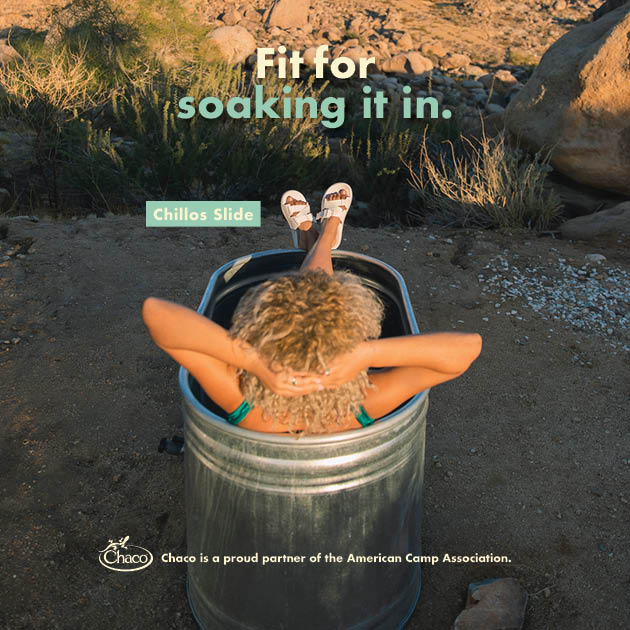 The Harm of Hawaiian and Luau-Themed Camp Events

Kids with Diabetes in the Non-Diabetes Camp Setting