The American Camp Association is committed to promoting healthy lifestyles for youth. In this issue of Camping Magazine we are pleased to present the second in a three-part series of "Healthy Teens" articles written by Stephen Wallace, director of counseling and counselor training at the Cape Cod Sea Camps and chairperson and CEO of SADD (Students Against Destructive Decisions), a national youth peer-to-peer education, prevention, and activism organization. Each article addresses issues of critical concern to youth, families, and camps and provides research-based insights into the attitudes and behaviors of today's teens. Most important, each article offers practical advice for camp counselors and directors intent on keeping their campers safe.

By almost any definition of the word, America faces an epidemic of adolescent drug use. Teens Today research from SADD (Students Against Destructive Decisions) and Liberty Mutual Group reveals that the average age of initiation to drugs is thirteen and that more than one third (35 percent) of teens say they have used some. Those numbers include almost one in six middle school students report having smoked marijuana and 30 percent of their high school counterparts saying the same (one in four reports having smoked it before or during school).

Of course, marijuana use is only part of the story. "Harder" drugs, illegal use of prescription drugs, and inhalants account for a large swath of the drug problem as well. According to Teens Today, 13 percent of high school teens report using drugs such as cocaine, crack, or ecstasy, and 17 percent say they illegally use prescription drugs—such as OxyContin® or Ritalin®—with 65 percent of them reporting taking them before or during school.

Even studies that point to a decrease in some destructive behaviors of students reporting at least one use of marijuana went up seven percentage points between 1991 and 2005.

Which Teens Are at Risk?

While it is commonly believed that boys are significantly more at risk than girls are, NIDA notes few differences between the sexes, but there are a few:

Gender differences aside, the truth is that all teens are at risk when it comes to drugs. Our society consistently sends the message that altered consciousness is the best way to have a good time, make friends, and relieve stress. According to Teens Today, 34 percent of teens cite "having fun" as their primary motivation to use drugs, while 13 percent site fitting in, and 23 percent site stress. These "decision factors," along with boredom and depression (14 percent and 16 percent, respectively), are common reasons teens turn to drugs. 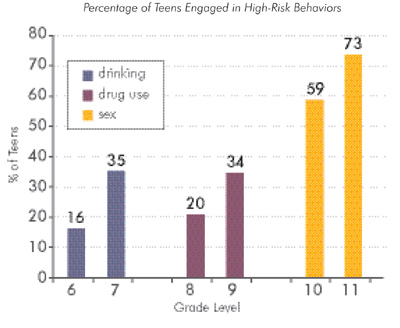 Other important risk factors identified by the CDC include early aggressive behavior, lack of parental supervision, and drug availability—suggesting the related protective factors of self-control, monitoring, and establishment of anti-drug use policies. Each is instructive to the type of environment we create at camp.

When Are Teens at Risk?

The Teens Today research has identified key "decision points" when certain destructive—or potentially destructive—behaviors, such as drinking, drug use, and sex, appear most likely to start. They include a significant spike in drug use between the eighth and ninth grades (see chart below).

A recent study from the National Center on Addiction and Substance Abuse at Columbia University (CASA) echoes that trend. Compared to thirteen-year-olds, fourteen-year-olds are:

Why Is This Important to Know?

Each "decision factor" and "decision point" provides a roadmap to prevention—at home, at school, and at camp. Knowing why young people might begin using drugs and when they are most likely to start gives us the information we need to engage campers in critical dialogue about choices. And that dialogue can be quite persuasive.

Indeed, seven years of Teens Today research highlight the influential role of significant adults in guiding behavior. Despite what other signals they may send, the truth is that young people:

Yet, when it comes to drugs almost one quarter (22 percent) of teens say their parents do not try to prevent them from using drugs (almost half of teens—41 percent—say their parents know of their drug use). These statistics should give us even stronger motivation to capitalize on our ability to reach young people with clear, consistent messages about the risks associated with certain behaviors.

What Can We Do About It?

While some adults see adolescent drug use as a rite of passage or perhaps simply inevitable, the truth is that it need not happen at all and it need not continue to cause such devastation to young lives, families, and communities.

And that's where we come in.

While most communities, including summer camps, experience the impact of youth drug use, they are also important catalysts when it comes to creating positive change. Indeed, the National Institute of Health (NIH) cites community-based programs as key to preventing drug use among young people. Among the benefits, they say, are increasing social competence related to self-efficacy and assertiveness, peer relationships, and communication skills. Perhaps most important, the CDC notes, "Prevention programs aimed at general populations at key transition points can produce beneficial effects even among high-risk families and children."

Camp directors and counselors can best help young adults navigate the difficult path of decision-making by engaging them in meaningful dialogue about the role of drugs in our society and their very real impact on the individual. As is the case with deterring underage drinking among our campers, there are some simple, effective strategies we can employ to address other drug use.

Here are just a few:

Melding drug prevention principles, applicable research, and our own experiences working with teens in summer camps, we can play an important role in guiding young people toward lifelong achievement and away from choices that temporarily or permanently impede their chances for success.

Stephen G. Wallace, M.S. Ed., has broad experience as a school psychologist and adolescent counselor. He serves as chairman and CEO of SADD, director of counseling and counselor training at the Cape Cod Sea Camps, and adjunct professor of psychology at Mount Ida College. For more information about SADD or the Teens Today research visit www.sadd.org. For more of Stephen Wallace's articles, visit www.teenproject.net and www.CampParents.org.

SADD's mission is simply stated: To provide young people with the best prevention and intervention tools possible to deal with the issues of underage drinking, other drug use, impaired driving, and other destructive decisions. Visit www.sadd.org and www.saddspeaker.org.

Originally published in the 2007 January/February issue of Camping Magazine.

Summer of the Toad