With depression, anxiety, and addiction rates high among adolescents (Keyes, 2006), and many youth engaged in relational aggression and other damaging social practices like bullying, there is clearly a need to find effective interventions to improve social skills, relationships, and overall well-being in our young people. Camp professionals know from experience that camp can serve as a positive, often life-changing, psychological intervention for youth, but for the "noncamp" world to understand the potential benefits of summer camp, rigorous research needs to be conducted and disseminated. Many in the fields of psychology and youth development have not considered summer camp as an intervention or preventative alternative to more traditional approaches such as individual or group therapy. Therefore, many parents do not understand the potential benefits a camp experience may have for their child.

Impact of Camp Experiences on Social Skills and Well-being

To become happy, successful adults, children need certain social skills to develop positive relationships with others (Crosnoe, 2000). Over the past 15 years, the field of positive psychology has looked into what makes people thrive rather than what causes psychological distress (e.g., depression, anxiety). Several studies (Diener, Suh, Lucas, & Smith, 1999; Seligman, 2012) have concluded that positive relationships are a key predictor of overall well-being. Good social skills, in turn, predict positive relationships (Gottman, Gonso, & Rasmussen, 1975). Youth who lack social competencies, just as much as youth who lack academic competencies, require coaching from adult teachers and mentors. In addition, all youth — even those with good social skills — benefit from practicing and honing those skills. Many summer camp rograms specifically focus on teaching, modeling, and practicing the social skills that most schools — because of lack of time and resources — cannot teach.

A recent study, conducted during the summer of 2014, investigated parents' and children's perceptions of the impact of a two-week, overnight camp experience on children's social skills and overall happiness. To assess these perceptions, information was gathered from a written survey campers completed at the end of their camp stay and from an online survey parents completed after their children returned home. One hundred sixty-seven children from six different two-week, residential summer camp programs in Arizona, California, and Colorado participated in the study. Campers were predominantly female (55.7 percent) and Caucasian (84.4 percent). The age range of campers was six to 15 years old, with the majority (82.2 percent) being between the ages of nine and 13. Just over half of the participants (58.7 percent) were first-year campers. While some evidence exists that growth occurs in social skills in camps (Thurber, Scanlin, Scheuler, & Henderson, 2007), changes in overall well-being have not been previously measured.

For the four "other skills" questions (which were unrelated to social skills and placed on the survey to assess whether campers were reading the questions as they answered), campers reported changes significantly above the neutral value of 3 (M = 3.30, SD = 0.52). Of the 153 campers who answered all four "other skills" questions, 73 reported no change in those skills and eight reported negative changes ("got a lot worse" or "got a little worse"). 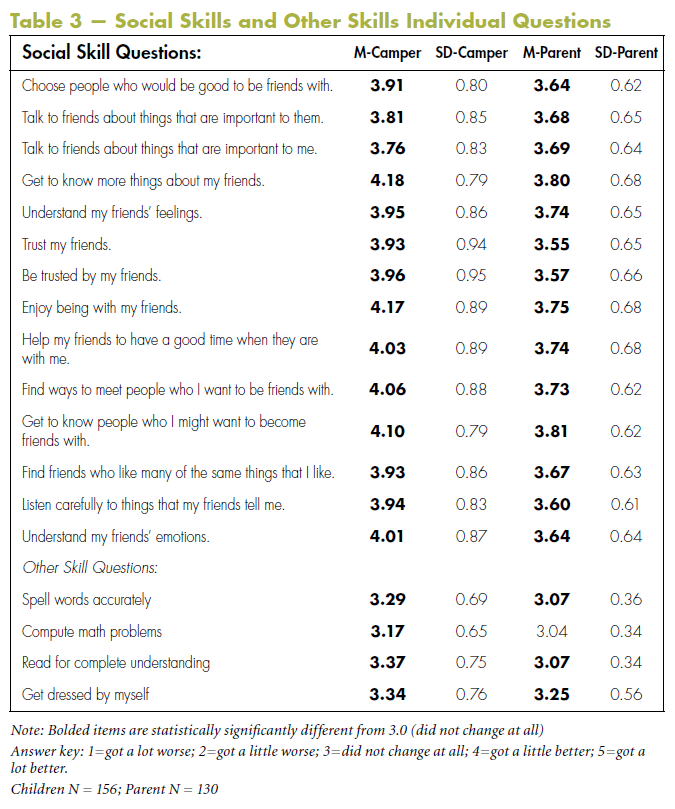 The social skills children reported as having been most impacted by their camp stay relate to meeting and getting to know people, which are emphasized in camp programs. Camp counselors, unlike teachers, view their primary role as one of facilitating friendships and positive experiences. Counselors are trained in skills that help campers build social skills. At most camps, counselors participate in a week of training prior to the summer. Training includes communication and leadership skills and team building. Counselors often are trained to facilitate "get to know you" games at the start of the session to help campers connect and form friendships. Because making friends is talked about at camp as an important part of the experience, children learn friend-making skills and have the opportunity to practice them during their camp stay. Given that camp programs emphasize forming new friendships and rekindling old ones, the finding that children perceive improved social skills as a result of camp supports both the hypothesis of this study and anecdotal testimonials.

Summer camp programs provide structured, extracurricular activities where youth are engaged with friends and have adult emotional support. Psychologist Nansook Park (2004) has described these types of programs as being important to help youth flourish and have a higher life satisfaction rating. Summer camp counselors and staff are focused on creating fun experiences for campers and promoting positive relationships among them. Many camp practices and traditions — singing, dancing, telling stories and jokes, and playing outdoors — increase positive emotions, which lead campers to feel what they describe as "happiness." As positive relationships predict happiness, the camp environment is an ideal setting to improve happiness because of the focus on building positive relationships. Children at summer camp have ample, daily opportunities to connect with other people and therefore, are — in fact — "happy campers."

Families and staff at summer camps are acutely aware of how beneficial the experience can be; however, the general public may not have similar knowledge of the summer camp experience and its potential as a psychological intervention that may positively impact children's social skills and happiness. As the children and parents in this study reported, they perceived that their camp experience had a positive impact on both their social skills and happiness. However, more research will need to be conducted to confirm that the perceived improvements represent actual social and psychological changes. Ideally, this study will lead to more people understanding the potential benefits of summer camp experiences on youth development, to more children participating in camp programs, and to more research being done to determine the benefits of camp experiences.

Park, N. (2004). The role of subjective well-being in positive youth development. The ANNALs of the American Academy of Political and Social Science, 591(1), 25-39.

Audrey "Sunshine" Monke, with her husband Steve, has owned and directed Gold Arrow Camp (Lakeshore, CA) for the past 27 years. She has been a member of ACA since 1989 and was president of WAIC (Western Association of Independent Camps) from 2007-2010. Audrey writes about camp and parenting at www.sunshine-parenting.com.