With summer's 2020 season looming, staff hiring and camper recruitment is in full swing, but we're also ordering supplies, determining content for staff orientation, and making sure various policies and practices are in order. One of these policies is the camp's Incident Response Plan, a plan that typically includes action steps to address communicable disease threats, various crises and emergencies (e.g., fire, lost camper), and the camp's OSHA policies (e.g., bloodborne pathogens and right-to-know practices).

Incident Response Plans vary from camp to camp. They're impacted by factors such as the experience of staff (especially leadership staff), the risk profile of the camp's program, the health profile of participants, risks related to the camp's geography, and potential threats associated with the community that surrounds the camp. Given today's world, it's no longer sufficient for a camp's plan to focus only on the notion of emergency, a concept linked to life and death. The plan ought to include situations that stretch the capacity of key leadership. These are the true crisis events, those that demand leadership in ways beyond one's experience. In sum, emergency situations plus crisis events are all "incidents," thus the term Incident Response Plan.

Recognizing the scope of potential events, camp Incident Response Teams include several individuals. Typically led by the camp director, the group is comprised of people keenly familiar with key aspects of camp, such as:

Exactly who gets activated is a function of the nature of the incident and what skill sets are needed for the camp's response. Not every person necessarily responds to every event. But the entire team needs training, as well as information about how the plan works, so each person understands their responsibility as well as that of others.

Camp Incident Response Plans traditionally focus on events such as fire, a lost/missing camper, loss of power to camp, intruder response (including armed intruder), severe weather, and significant personal injury. Those plans are certainly needed, but today's camps need a more robust plan profile. Consequently, consider incidents such as prolonged temperature extremes, communicable disease outbreak, death of a camper or staff member, power loss for more than 48 hours, the need to shelter in place because of an external threat, and the response team's resiliency when an incident occurs for which there is no plan. Consider the robustness of your camp's plan. What incidents are not addressed? Should they be included?

To determine this, give key people on your Incident Response Team a copy of the grid illustrated in Figure 1. 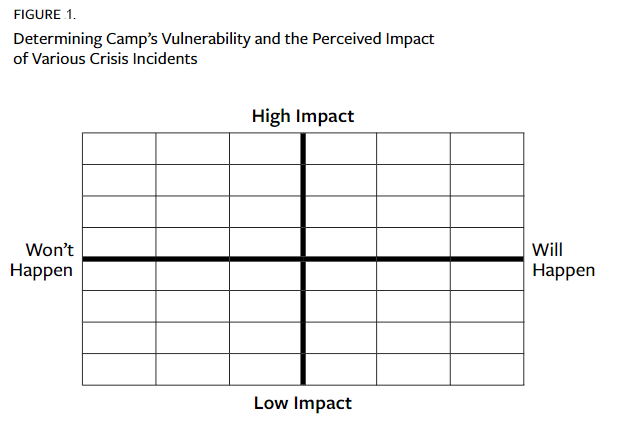 Note that the grid's horizontal axis ranges from low to high potential that a given event will happen, while the vertical axis indicates that event's impact should it occur. Direct each person to individually access various incidents and plot them on the grid at the point where they determine the incident's likelihood of occurring intersects with the incident's impact should it happen. Here are suggested incidents to plot: 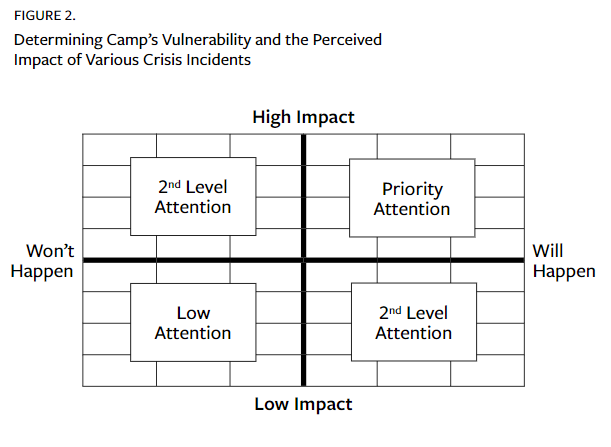 After people have marked items on their charts, compare charts to see how perceptions vary. Then ask the team to work as a group and, using a clean copy of the chart, make a determination for each event that represents the camp's risk profile.

Use the camp's risk profile to identify a starting point for the response team (see Figure 2, above). Specifically, items plotted in the upper-right quadrant are most likely to occur and would have high impact, so these incidents get priority attention. Second-level attention should be paid to events in the upper-left and lower-right quadrants, with the lower-left quadrant getting low attention. That being said, a word of caution is in order: items in the lower-left quadrant have a low chance of happening but also carry the potential for catastrophe should they occur. That means adjusting your potentials as best for your camp.

Using the team's starting point — items in that upper-right quadrant — ask if the camp's current Incident Response Plan is robust enough to address these incidents. Make adjustments as needed, including adjustments to supporting documents or policies. For example, does the Staff Manual appropriately describe the plan from the perspective of staff members? Does that description include limiting staff use of social media or other communication sources to "share" their experience? Also look at parent materials, both items in hard print and on websites. Can parents quickly access information when a critical incident occurs? Who updates that information as time rolls along? Then consider your local emergency management services (EMS) personnel; do they know about the camp's plan, the skills of your staff, and your thoughts as to how EMS might fit into what you've planned? Also interface with your liability and loss insurance carrier(s). These folks should be aware of the camp plan, and they often have experts who can offer suggestions and support. 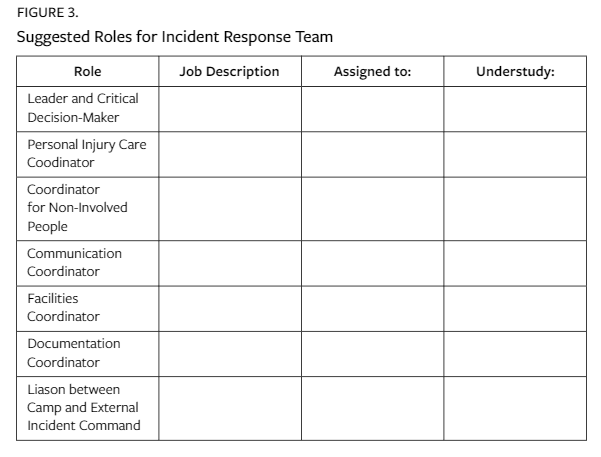 When updating your plan, provide a written job description for each team role (see Figure 3 above). Written job descriptions guide the individual taking on that role, but they also help identify task overlap that benefits from clarification and reveal areas that have been overlooked. For example, who is responsible for contacting the camp's insurance carrier — the camp director or the communications person? While working through this, identify an "understudy" for each member of the team. Backup is important, something all too apparent when a team member is part of the incident.

Your Incident Response Team might benefit from additional training. Known as "tabletop exercises," this training allows one to pose an incident for which the team steps through their response. Such exercises develop team relationships while improving response patterns and may identify needed plan improvements or updates. Consider including people from the local community's Incident Response Team. This helps them understand the capacity of the camp's team as well as the camp's plan, contribute their ideas, and enhances communication when a real incident occurs.

Continued preparedness at the national level means that several information sources are available. Access the expertise of your insurance carrier and county or local preparedness personnel. Then take a serious look at what you've written for your camp and add capacity that improves your own preparedness.

Linda Ebner Erceg's (RN, MS, PHN) many years of year-round work as a camp professional, leadership in the Association of Camp Nursing, and participation in ACA initiatives contribute to her Camping Magazine content. She facilitates the Healthy Camps Committee, a collaboration between ACA and ACN, while also enjoying a robust speaking and consulting career from her Bemidji, Minnesota, home base. These activities help make her personal motto, "Healthier Camping for All," a growing reality. Contact Linda via email at erceg@campnurse.org.

Their Space or Yours? Social Networking Sites Bring Risks and Rewards to the Camp Community

Fumble and Recovery: Transforming a String of Failures into Robust Success

Revised ADA Requirements: What Do They Mean to You?