Where public utilities meet the properties they serve, knowing what's buried before you disturb the ground is more than a good idea: It is the law and violations are subject to significant penalties. After millions of dollars in damage and fatalities across the country, the reasoning behind the laws isn't hard to imagine. "Call before you dig" is what's required, and the established procedures serve to protect everybody, utility owner and landowner alike. But if knowing what's below is the law for public utilities, shouldn't that same idea apply to camp's buried utilities? Without question, it surely does.

At the perimeter of camp property the rules are absolute. Suppose that a volunteer group is coming in this weekend to do some landscaping at camp's entrance. You're thinking about getting tools ready and making arrangements for meals, but what about calling for utility locations? You think, "This is nothing outlandish, just little stuff around the administrative building like digging out old shrubs, planting new ones, and putting in new signs. All of that is well away from the street and power poles, so there's no need to make a fuss and call anyone. Right?" Wrong! There is no real limit to how deep you can go without calling for help. Utilities (including gas, cable, electric, water, and sewer) are connected to your property from a main somewhere in the roadway right of way or a utility easement to a service connection. The utility companies' service and maintenance responsibility usually stops at their interface or metering box. For a water service, that's the water meter. Same thing for gas and electric. If not installed in the building, water meters are usually set right at the property line, but the others usually have their meter on or at the structure being served. This means the utility company has a connection all the way through your property to that metering point. Until they come to the property and physically mark its route, there is no way to know where it is or how deep it might be. Fence post, mail box, trees, landscape beds — the type, depth, and complexity of the work really doesn't matter. Call before you dig.

Electrical and gas lines could be very shallow (less than 12 inches in some places). In the case of electrical services, the power company is responsible to maintain the wire that runs from the transformer (usually on the pole or at the right of way) to the meter mounted on the building. The main power feed for the building may be under the work area, neither as deep nor as protected as you might think. Furthermore, electrical service wire is not required to be in a conduit or other safety covering. And because the biggest threats are heat and water, these are often buried shallower to keep them cool and out of the groundwater table. The same holds true for natural gas service, cable TV, and telephone lines. All of those are often routed separately from each other just to avoid being damaged if another utility is being repaired. So, although you think the project is all clear because it's away from the street, the truth is there could be a giant "spaghetti of scary" all through your planned work area. The first shovel into the ground could bring a disaster.

It's best for the person anticipating the work to mark the area. To avoid confusion, "Proposed Work" is always marked in white (see the Buried Utility Marking Color Code). When marking the limits of construction, think big and mark the whole area, not just where you think there might be digging. Consider where equipment may be traveling and where stuff may be stored during the work and include those areas as well. At the same time, if your property has 500 feet of road frontage and you're installing a new entrance sign: "Turn Here for Camp Haveagoodtime!" mark only where the sign is to go and where equipment will need access. As you'll see, workers are on a very tight timeline and there are other sites that need to be marked also. Be considerate of their time and effort.

Once the planned work area limit is marked, it's time to get help. Fortunately, the states have made it easy to ask. Every state has laws and regulations that pertain to locating buried utilities. Most of the states have a centralized call facility that receives notice from contractors and property owners. The universal, one-call buried utility location service number is 8-1-1. In turn, the "one-call center" reviews a consolidated database of utility owners in the work area and then notifies them of the specific location for which work is being planned. Each utility in the state pays a participation and management fee to fund and operate the one-call center. Contractors can either pay an annual fee or a fee each time they call. Property owners generally pay nothing at all to request utility locations inside the right of way or on their property up to their meter(s). While the requirement varies, usually, two to five working days are needed to notify all of the utility companies that may have infrastructure in the area. When the call is placed, the call center will provide the caller a registration number and the date by which all known utilities will have been marked. The registration number serves to document the details of the request by the caller as well as information provided to the caller.

Usually within hours, notification is passed to the utility companies that may be affected by your project, and knowing the time frame under which they are to complete the work, they schedule a time to locate lines. Sometimes, several utilities will contract with the same private company and one person may locate lines for several different utilities. Utilities that have no infrastructure in the work zone will report that back to the call center. Armed with a map of the area of the utilities they're there to locate, and usually special equipment in hand, the worker will paint indicator lines to show the approximate route of each known utility. By the completion date, all of the buried utilities on record will have been marked. The color code chart will help to identify the utility and its route. The locator may have used paint or flags, but the color coding will be the same for either kind of mark. 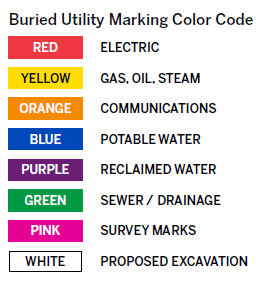 Once the locate deadline has passed, it's wise to memorialize what's been marked in that area. The best way is to prepare a measured sketch noting distances from the marks to known, permanent points (like building corners, utility poles, and such) so the marks can be mapped for future reference. As a poor second option, take photos of the mark out. Again, those must include reference points so there is something of a scale for later. Even if not to scale, knowing at least that something is buried in the area is much better than not knowing at all.

Even though all of the marking is required to be complete by the deadline, it's worthwhile to apply common sense to what's been marked before you proceed. If, for example, there's a "Buried Gas Pipeline" placard next to (or near) your project site, and you see no yellow markings, it's in your best interest to call the one-call center and verify that the gas company has indeed acknowledged its notification. Despite the efficiency of the system, it's still made up of imperfect people.

Now that the buried utilities are no longer secret, the project can be carefully planned (or sometimes reconsidered altogether) and safely executed.

Plenty of liability and cost will be assigned when buried utilities are damaged and the 811 rules have not been followed. Take, for example, the landscape team that gets a giant surprise when they hit the electrical feed. Provided that emergency services aren't required to tend to injuries or douse a fire, the first people on the scene (even before the utility repair folks) will be the locator to document that someone could have marked the utility if a call had been made. State statutes typically hold responsible the person in charge of the work and the property owner for any and all costs associated with the repair. Those could include damage to the meter, consequential damage to neighbors for a power outage (or more likely the surge just before the outage), as well as total labor costs to make the repair.

Many camps have long roadways and lanes into camp, and so are wholly responsible for the distribution systems from their property boundaries to the point of use. Will an 811 call locate private utilities? As mentioned earlier, participating utilities pay annually to maintain the database of buried utility records with the call center, and for notification of work where the records show. But without maps in the database in the first place, they have no way of knowing what may be buried at camp. So, no, calling 811 will not mark your utilities inside camp beyond the service meter.

Do not despair. The utilities and the property are yours in the first place, so the liability is limited to camp's property improvements, (along with the safety of camp's staff and guests). You're not likely to damage any property but your own. Furthermore, there are technologies to locate buried utilities even without a map. This kind of private mark out requires more than just a few days of planning, and unfortunately, this service is not free. The same companies that perform location services for the utility companies are often able to conduct private locates using the same equipment and care, and the camp would pay them directly. Just like their work for the utility companies, this goes much faster (and is much less expensive) if they can refer to paper records you may have tucked away. After scouting around for visual clues (like electric and gas meters and propane tanks), old maps and anecdotal information provide critical insight into both what they're looking for and where to begin.

Usually, private location work must be scheduled weeks in advance. If camp has time to wait, that may not be a problem. But when the power is out or the toilet isn't flushing, repairs need to be made immediately. If the location work is already complete, surveyed, and mapped, then your staff can reproduce the marks from the archived maps and photographs already on file.

In a perfect world, the property owner has detailed maps, drawn to scale, of the location for every power line, telephone cable, sewer and water pipe, and gas line. But after decades of construction and growth over sometimes hundreds of acres, few organizations really know for sure what is where. Smart people proceed cautiously where there is doubt. So, whether that's camp facilities staff trying to clear a sewer clog or a contractor constructing a new building, while slow work costs camp money, working blind to what's below is likely to cost camp much, much more in the end.

The technology to help plan for safe work on camp grounds is widely available and it only requires that the leadership acknowledge that time and investment spent to map camp's utilities is a fraction of the cost of ignoring things until there's a crisis. Leadership owes campers the most transparent, trouble-free stay they can offer. And they owe staff the safest, most certain workspace they can provide. What could be easier or more comforting than to know where your buried treasures are?

Rick Stryker is a professional engineer who is passionate about camps and the opportunities that they provide. He's always delighted to answer email questions at rstryker@reagan.com.

Striving for More Than "Surviving": An Argument for a Non-Inclusion Model for Camps