In August of 2018, the Donnell Fire started in Tuolumne County, California — eventually destroying some 60 square miles of forests before burning out on October 1 of that year. It was a stressful time for many in the region. This included Jason Poisson, executive director of Camp Jack Hazard. Poisson and his team were hosting a family-style camp when the fire began eight or nine miles away. They spent several days observing the smoke from afar, which did not appear to be a serious threat to the camp itself. Then on August 3, Poisson recalls, the weather changed:

"All of a sudden, we had these easterly winds that were gusting at 60–70 miles an hour, pushing the fire toward us. A few of my staff just happened to be in the town that’s about a mile from us, and they noticed that folks were evacuating. We pulled everyone together and started discussing what a [camp] evacuation would look like."

In retrospect, Poisson says the camp was extremely lucky that they were hosting families at that time — because each group had their own transportation, and some families decided it was time to immediately pack up and leave. Unfortunately, the fire was moving so fast that only three out of a dozen or so vehicles made it out before the others had to turn around and head back to camp. This, in itself, was a valuable lesson for Poisson:

"Camps talk a lot about our Emergency Action Plans, but we don’t always think through all of the possibilities of what might happen when those action plans are put into practice — and what curveballs might be thrown at us. Once some of those who had evacuated came back, it quickly became apparent that we could have a hard time knowing who or who was not on site."

Eventually, with the help of the local sheriff, everyone at camp was able to evacuate — driving a few hundred extra miles over the Sierra Nevada mountains to find their way to safety. And that’s when several weeks of waiting, hoping, and fielding calls from anxious camp alumni began. While rumors of complete devastation spread quickly on social media, Poisson said he often had to play a parental role — encouraging stakeholders to wait and see what the outcome might be and to only share news from trusted and verifiable sources.

Ultimately, that patience paid off. When staff were finally allowed back on site, they discovered that fire had run right through the property, coming within 15 feet of the director’s cabin and dining hall. Yet because of a combination of good fortune and careful preparation, the only significant structure that was actually lost was a relatively inexpensive tent cabin.

Now, several years after the fire, Poisson talks about the experience with a sense of relief and optimism. While the evacuation and waiting were stressful, the outcome could have been so much worse. Poisson believes several factors contributed to the camp’s resilience. These included:

Aggressive Landscape Management: Even before the fire, Camp Jack Hazard had been working with the forest service, a logger, an arborist, and a fuel-reduction specialist, removing 86 trees and significantly cutting back on the amount of fuel available for the fire to burn. The plans had been to eventually remove around half of the trees on site. Poisson likes to note that the fire ended up doing most of that hard work for him.

Alternative Structures: Camp Jack Hazard didn’t necessarily start using tent cabins because of fire, but when fire did arrive, it proved in retrospect to be a very wise decision. Because these structures don’t require permitting, they can be erected quickly using volunteer labor for as little as $10,000. That meant fewer upfront costs, of course, but it also meant that it cushioned the blow when one was lost to the fire.

Good Relations with First Responders: As the Donnell Fire burned through the surrounding area, Poisson was grateful that local firefighters decided to use the camp as their home base. One of the reasons they did that, he says, was that the property had been aggressively managed for fire risk — including cleared fire roads and well-managed defensible zones. Poisson has been proactive in managing relationships with firefighters and other first responders ever since, creating fundraising sweatshirts that recognize the invaluable role these heroes play in the community.

As a changing climate leads to worse and more frequent wildfire events, the camp community is going to have to get creative in how we approach the topics of prevention and mitigation. We’ll have to think beyond tried and tested strategies like defensible zones and barricade gel and also incorporate innovative approaches like alternative structures (yurts, tent cabins, etc.) that cost less if lost — and may even be removable before a fire sweeps through.

The Rising Cost of Insurance

Camp Jack Hazard’s experience shows just how important it is to prepare for wildfire and its aftermath. Yet it’s not just the flames we need to worry about. As exposure to wildfire becomes more common and more widespread, it’s also leading to a significant rise in the cost of insurance. In fact, property insurance is becoming increasingly hard to come by for many camps in the West. Poisson himself no longer carries any form of fire insurance.

According to Queron Smith, vice president of underwriting at The Redwoods Group, there’s a fundamental need to rethink the ways that camps and other organizations protect their financial interests from fire:

"The idea of insurance is to manage uncertainty and spread risk out across a greater number of people so that it becomes more manageable if the worst does happen. Yet in certain wildfire-exposed areas, the likelihood of your camp burning down has become so high that the basic premise doesn’t really work anymore: it’s just too hard to find carriers that are willing to carry that risk at a cost you can afford."

If camps can find property or fire insurance at all, many of them in wildfire-exposed areas are now seeing rate increases of high double or even triple digits, which is obviously not sustainable for the long term. Yet, Smith says, there are ways to mitigate this challenge too:

"For wildfire-exposed camps, they might consider thinking about ways to reduce how much property they have that’s exposed — by only insuring core structures, for example, and shifting to yurts or tent cabins for everything else. As always, you should consult your insurance broker about what is right for your specific circumstances."

Smith also suggests that camps that are particularly exposed to this risk may want to explore alternatives to the traditional insurance model, and instead put aside resources and/or build contingency plans that are focused on ways to recover:

"We are seeing some camps spend money they would otherwise spend on insurance to directly bolster their reserves so they have resources on hand if the worst does happen. That, plus maintaining strong donor and volunteer relations to help you rebuild, can get you a long way toward becoming more resilient in this new normal."

While there are many ways to think creatively about the challenge of wildfire, there’s also a need to recognize that what might work for one camp may not work in exactly the same way for another. Tent cabins and yurts might be fantastic for healthy, able-bodied populations, for example — but camps serving populations that have health, disability, or accessibility issues may require more specialist, and more expensive, structures. Similarly, relying on reserves may be a viable option for camps that own their own properties and are in a strong financial position — yet that may not work in the same way for other camps without such resources so readily available.

Ultimately, the whole camp community is going to be facing this threat for the foreseeable future — and we have a long way to go before we develop approaches that work for everybody.

A panel discussion dedicated to this topic will take place at the ACA National Conference in Portland, Oregon, in February 2022. Organizers are encouraging all camps — even those that are currently not experiencing significant wildfire threats — to attend and engage with this critically important topic.

Sami Grover develops safety-related content for The Redwoods Group and is the author of We’re All Climate Hypocrites Now, an exploration of the role of personal responsibility in solving the climate crisis. 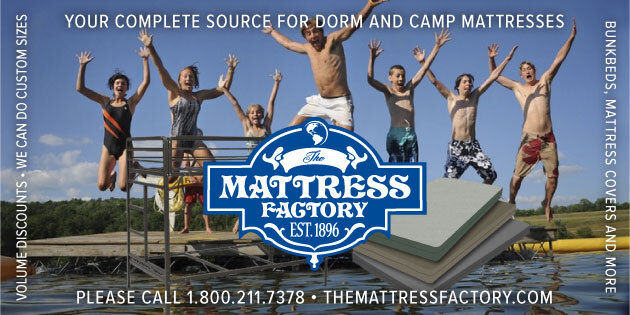