Most camp professionals have known intuitively for years what new Teens Today research from SADD (Students Against Destructive Decisions) and Liberty Mutual Group now makes statistically clear — young people who take positive risks are less likely to take negative ones. And there's no better place to learn about positive risk taking than at camp.

Indeed, summer camps have long been viewed as ideal environments for self-exploration and learning — safe venues away from everyday influences that might otherwise inhibit the very types of physical, social, and emotional pursuits that build the Sense of Self and satisfy the natural adolescent predisposition to test limits.

Adolescence marks a stage of incredible physical and cognitive growth. Social and emotional development also occurs at a surprising — and sometimes bewildering — rate. Research at UCLA's Lab of Neuro Imaging even suggests that, during adolescence, boys and girls undergo significant neuronal rewiring, helping to explain changes in such functions as self-control, judgment, emotional regulation, organization, and planning. This research, in tandem with studies performed at the National Institute of Mental Health and McLean Hospital in Massachusetts, challenges traditional thinking that brain development is complete by age eight or ten. Risky behaviors that previously may have been attributed to hormones or a lack of emotional maturity are now increasingly linked to a natural, even predictable, neurochemical process.

As children grow, these risky behaviors tend to increase. Teens in particular are likely to take risks in order to assert their individuality and independence. Significantly, creating meaningful opportunities for positive risk taking can not only decrease the likelihood of negative risk taking but also satisfy a developmentally driven appetite to try new things and to make new discoveries about themselves and the world around them.

The Myth of Risk

It is not news that teens are hard-wired to take risks. What is news is that those risks need not be negative ones. Teens Today research reveals that while many adults have long linked adolescent risk taking with behavior such as reckless driving, drinking, drug use, and early sexual behavior, a majority of young people believe that risk taking refers to positive activities. 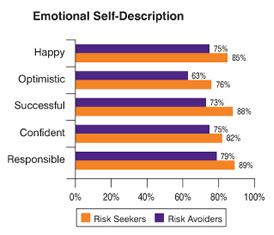 Risk Seekers are also more likely than Risk Avoiders to:

These teens are also less likely than their peers to say they often feel bored or depressed.

So, what are these positive risks? Among the most important are the physical, social, and emotional risks that the camp experience promotes. Young people who challenge themselves by engaging in physical or athletic events (e.g., rock climbing, swim meets); joining in social activities with other teens (e.g., dances, skits); or opening up and sharing their feelings about their own life experiences (e.g., being away from home, conflicts with a friend) may benefit the most.

Other examples of positive risk taking include the following:

Quality vs. Quantity
The research also suggests that it is not so much the number of activities in which young people engage that makes the difference in personal behavior but rather the intrinsic challenge in the activities themselves. In other words, steering young people toward activities they perceive pose a risk for failure and then helping them to succeed will prove most beneficial.

Self-Esteem
A hallmark of camp is its impact on the self-esteem of those who participate. Camp files routinely include letters from parents reflecting on a "more confident" child or teen who has been returned to them at the close of the summer. While there are many ways in which camp counselors can help young adults develop a healthier self-image, none is more important than encouraging them to take positive risks.

Self-esteem, a composite of the experiences one has (and the evaluation of those experiences) and how closely one's achievements match one's expectations is, in many ways, captured in the larger Teens Today construct of Sense of Self. 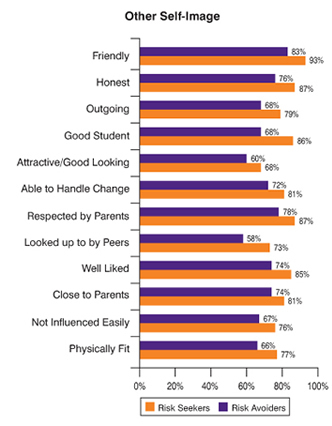 Sense of Self
The Sense of Self is comprised of an adolescent's progress in completing three critical developmental tasks: achieving identity, attaining independence, and establishing healthy relationships with peers. Not surprisingly, the Sense of Self has been tied to positive risk taking. For example, Risk Seekers are more likely than Risk Avoiders to feel good about themselves across a wide spectrum of self-image (see the "Self-Image" graph). A teen's sense of self is also linked to sexual behavior, relationships with parents, and peer pressure.

As you might expect, high sense-of-self teens feel more positive about their own identity, growing independence, and relationships with peers than do their low sense-of-self counterparts. Specifically, they report feeling friendly, honest, smart, successful, responsible, confident, happy, well-liked by others, respected by their parents, able to handle change well, academically successful, not easily influenced to make bad decisions, close to their parents, attractive, physically fit, looked up to by peers, outgoing, and optimistic.

This information is critically important in helping us to better understand the role that self-definition plays in predisposing young adults to destructive decision-making, establishing a clear link between "who they are" and what they do.

What Does This Mean for Camp Counselors?

Although the benefits of positive risk taking are clear, many teen campers may be afraid to tackle new challenges. Taking risks sometimes means exposing vulnerabilities they might prefer remain private. A counselor's encouragement and unconditional support will go a long way toward helping teens take positive risks.

Both middle and high school teens report that their friends and other "significant adults" positively influence them to challenge themselves.

Camp counselors can help teens to take positive risks by:

There are also important steps camp counselors can take to positively enhance their teen campers' sense of self.

It is easy to conclude that camp counselors make a positive difference in the lives of young people. Now we know more about why.

By promoting positive risk taking, counselors can boost a camper's sense of self and cement in place important prevention factors that will help them to avoid trouble outside of camp. And laying an early and solid foundation of good decision-making helps teens to build productive, enriching, and successful lives. In this way, the camp experience transcends time and place, unleashing on communities across the country and around the world the energy, optimism, and industriousness of youth.

Stephen G. Wallace, national chairman and chief executive officer of SADD, Inc. (Students Against Destructive Decisions), has broad experience as a school psychologist and adolescent counselor. He directs the annual Teens Today research project, a partnership of SADD and Liberty Mutual Group, and is director of counselor training at the Cape Cod Sea Camps in Brewster, Massachusetts.

Originally published in the 2005 May/June issue of Camping Magazine.

Considerations for Implementing Mental Health and Behavioral Supports at Camp