In 2005, the American Camp Association (ACA) published the first large-scale national research project assessing the youth development outcomes of children who attend day and resident camps in the summer. Children between the ages of eight and 14 from 80 ACA-accredited day and resident camps participated in the study. Results indicated the camp experience was a positive influence on youth development in four domains: positive identity, physical and thinking skills, social skills, and positive values and spirituality. In addition, evidence showed that growth at camp was maintained over a six-month time period. Specifically, respondents indicated that camp helped them make new friends and get to know other campers who were different from them. ACA acknowledged that the camps included in the study did not serve children with developmental disabilities and suggested that future research investigate experiences and outcomes within this population (ACA, 2005).

Positive Youth Development (PYD) is a theoretical framework that emphasizes internal and external assets designed to promote resiliency and healthy development in youth. It differs from traditional treatment approaches that focus on changing maladaptive behaviors by emphasizing the development of personal resources, supportive relationships, leadership ability, and community engagement (Lopez, Yoder, Brisson, Lechuga-Pena, & Jenson, 2015). Although the PYD framework has been used successfully to support at-risk youth, it has received only limited application in programs for children with chronic illnesses and disabilities (Maslow & Chung, 2013). Walker and Pearman (2009) reported that camps for children with chronic illnesses enhanced self-esteem, assisted with normalizing attitudes to illness, and promoted skills in self-care of disease. More recently, Gillard and Space (2014) argued that campers with chronic and serious illnesses benefit from camping experiences where they can make new friends, participate in new and enriching experiences, and receive medical support. A review of the literature also includes positive developmental outcomes from research studies organized by diagnosis such as cancer (Gillard & Watts, 2013).

Do campers with serious illnesses, disabilities, and other life challenges experience positive developmental outcomes, as reflected by scores on the Young Camper Learning Scale and the Older Youth Outcomes Battery?

Are age, years at camp, and overall satisfaction with the camp experience associated with scores on the Young Camper Learning Scale and Older Youth Outcomes Battery, among participants with serious illnesses, disabilities, and other life challenges?

The study took place at an ACA-accredited camp in a southeastern state that works in collaboration with over 60 community partners to serve nearly 10,000 campers through weeklong summer camps and weekend retreats at three medically supported locations. The camp’s mission is “to help each camper grow in their confidence and experience the joys of childhood.” In the summer of 2014, the host organization offered 39 different theme camps that targeted different populations, including but not limited to children with cancer, diabetes, brain injuries, burn injuries, amputations, autism, and Asperger’s Syndrome. Each camp session was designed to provide life-changing recreational experiences that promoted positive developmental outcomes including independence, responsibility, friendship, and affinity for nature. Programs and activities were planned by the host organization with input from camp partners. All but one of the camps were five days in duration.

Camp staff administered the Young Campers Learning Scale and four ACA Youth Outcomes Battery (YOB) measures (Sibthorp et al., 2013) to all participants on the last day of each camp session following the four-phase protocol outlined by ACA (2007). Specifically, program staff administered the age-appropriate survey to each cabin, providing assistance with the interpretation of question wording only when necessary due to age or disability. The Young Camper Learning Scale was designed to measure camp outcomes for youth six to ten years old. A mean index score was computed using responses to 14 items measured on a four-point scale ranging from 1 (No) to 4 (Yes, a lot). The Older Youth Outcomes Battery, which consists of 11 scales, was designed to measure outcomes for campers 11 to 17 years old. The Responsibility, Affinity for Nature, Friendship Skills, and Independence scales were selected for administration to older campers because they most closely represented the target outcomes of each camp session and are consistent with internal and external assets included in the PYD framework (Lopez, Yoder, Brisson, Lechuga-Pena, & Jenson, 2015). Mean indices were calculated for each six-item scale, and ranged from 1 (Decreased) to 5 (Increased a lot, I am sure). Independent variables included age, years at camp, and overall satisfaction with the camp experience. The latter was measured on a ten-point scale ranging from 1 (Absolutely the Worst) to 10 (The Best Time Ever). 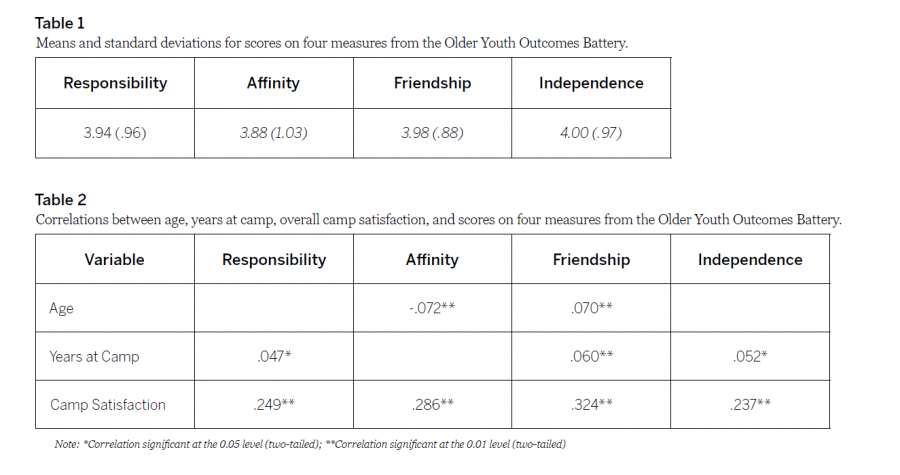 Data collection from all three sites yielded N = 880 surveys from young campers and N = 1,979 surveys from older campers for an overall response rate of 76 percent. For younger campers, the mean camp rating was 9.42 and the index score was 3.49. Age (α ≤ .05; r =.068), years at camp (α ≤ .05; r =.070), and overall satisfaction with the camp experience were positively correlated with scores on the Young Camper Learning Scale (α ≤ .01; r =.268). On the older camper survey, the mean camp rating was 9.19, and mean scores on each of the four outcomes ranged from 3.88 to 4.0 (see Table 1 above). Age was significantly but weakly correlated with Affinity for Nature (negative) and Friendship (positive). Years at camp was significantly but weakly correlated with Responsibility, Friendship, and Independence; all relationships were positive. Camp satisfaction was positively and significantly correlated with all four outcome measures (see Table 2 above).

This study provides evidence that camps for youth with serious illnesses, disabilities, and other life challenges can produce positive developmental outcomes among younger and older participants. Scores for older campers were between the 40th and 60th percentiles on the ACA Youth Outcomes Battery Norming Tables (ACA, 2012), which is consistent with national averages and indicates that participants experienced outcomes similar to those of typically developing youth. Overall satisfaction with the camp experience exhibited positive associations with outcome scores for younger and older campers. The influence of age and years at camp was minimal. Results suggest the outcomes of camp programming are related to clearly defined goals that support the needs and interests of the populations served, irrespective of illnesses, disabilities, or life challenges. Campers developed in the areas of independence, responsibility, friendship, and affinity for nature, which are important skills for resiliency and healthy long-term development. Findings can be used to support evidence-based practice by informing staff training, refining programming, and further developing areas in need of improvement. Advisory boards, funders, and other organizational stakeholders can use outcomes identified through research to inform decision-making and promote efficient and equitable allocation of organizational resources. This is particularly important for camps that serve underrepresented youth populations such as those included in this study.

Although the ACA YOB protocol is clearly outlined, some bias may have been introduced when counselors administered the questionnaires to campers. Counselors and program staff want campers to have successful experiences and could lead children to answer in a positive manner, especially when reading questions to younger respondents or individuals with cognitive challenges. This underscores the importance of proper staff training when administering outcome measures to participants. Despite potential limitations, this study adds to the body of evidence that youth with disabilities, serious illnesses, and other life challenges benefit from camp experiences, particularly those designed to promote positive developmental outcomes. Future research should seek to further validate the Young Campers Learning Scale and the Older Youth Outcomes Battery by comparing results between camps that serve youth with different illnesses, disabilities, and life challenges.

Alice Hall, PhD, has been an associate professor in child and family development at Georgia Southern University since 1999. Her area of expertise is youth development and programming. She has been the director of resident summer camp, day camp, and an after-school program.

John Peden, PhD, is a professor of recreation and tourism management at Georgia Southern University.

Jerri Kropp, PhD, is an associate professor of child and family development at Georgia Southern University.

Evaluating Appreciation, Possibility, and Friendship Skills at a Camp for Youth with Serious Illness

Excellence in Research in Practice

Camp Research: Your Link between the Work You Love and the Real World

There's a Camp for That!