Since September 11, the world in which American military children grow up has changed dramatically due to unprecedented levels of deployment and the increased reliance on Reserve and National Guard members. More than 2.1 million American men and women in uniform have deployed. Of those service members, approximately 44 percent are parents (Department of Defense, 2014).

This shift has left many children with parents who have been injured, disabled, or even killed during combat. Through military opera-tions such as Iraqi Freedom, New Dawn, and Enduring Freedom, service members have suffered great loss and trauma — an estimated 6,800 have died, 52,200 have been physically wounded, and 651,000 suffer from traumatic brain injury (TBI) or post-traumatic stress disorder (PTSD) (Fischer, 2014).

Faced with this glaring societal issue, Golden Corral restaurant chain founder James Maynard and his daughter, Easter Maynard, began working with a team in 2010 to explore ways to give back to the military community. Golden Corral has a long history of honoring the military, so supporting military children was a natural extension of what the company was already doing. The idea of sending mili-tary children to camp as a way to thank their families and offer them a life-changing week away from home became a reality in 2011, when Camp Corral opened as a pilot, one-camp program.

Four years later, Camp Corral is now its own 501(c)(3) nonprofit with 23 camp locations in 19 states that provide “the week of a lifetime” to military kids free of charge. The organization has served more than 6,500 military children since its founding; 75 percent of its campers are children of wounded, disabled, or fallen service mem-bers. Headquartered in Raleigh, North Carolina, Camp Corral works closely with camps across the country to host each ses-sion. Each host camp is accredited by the American Camp Association or operates under its standards, and provides activities that are fun, new, and challenging, such as archery, horseback riding, and ropes course challenges. Given the many difficulties these campers face, a military and family life counselor (MFLC) is available on site at each camp.

Through the program, campers have the opportunity to build friendships with other kids who understand the unique challenges that come with military life. Camp Corral is intentionally designed for military children and their specific needs. The program works to create an atmo-sphere where America’s youngest heroes can just be kids for a week, a luxury many do not always get to enjoy. Often, because of deployments or injuries, military kids are forced to transition into the role of care-taker for their families at a very young age.

Before taking on a military-centered camp program, camps and their staff should be aware of several aspects of the military culture. We have found that these five stressors have a significant impact on the lives of campers, and the effects are sometimes seen at camp:

It’s important to remember that, first and foremost, military kids are just kids. However, many of them have experienced significant hardships in their young lives, and their behavior can often reflect that, be it through extreme homesickness and separation anxiety, aggression, and/or detachment.

The children we serve face many challenges related to the extended and multiple deploy-ments of their parents. Approximately 18.5 percent of service members returning from Iraq and Afghanistan report having PTSD, and 19.5 percent report experiencing TBI during deployment (Tanielian et al, 2008). Studies show that nearly every service member who sees combat during his or her career returns with varying degrees of PTSD, the impact of which is felt not only by the service members themselves, but also by their families, friends, and the communities to which they return. While many programs focus on visible injuries and disabilities, the effects of PTSD and TBI are often forgotten. At camp, military kids have the opportunity to build strong connections with other kids who under-stand why mom always wears sunglasses inside or why dad will not go into a movie theater, shopping mall, or any other crowded place.

Loss of a Parent

Over the last decade, more than 10,000 children have suffered the loss of an imme-diate family member in the service through combat or noncombat-related death (Clever et al, 2013). To a child, the loss of a parent can mean different things. Some children may not be cognitively ready to understand the implications of death, while others may understand the finality of it but not be able to come to terms with why it has happened. At camp, many kids — often for the first time — meet others who have lost a parent and can relate to the grief that their peers are experiencing.

While we may think service members are the only victims of trauma, the reality is more complex. The service members experience the events firsthand; however, their family and friends can experience secondary trauma as they attempt to empathize with their loved ones. Some studies show that the children of parents with PTSD have higher anxiety levels and greater aggression (Cozza et al, 2010). Not all studies have mirrored these findings, and greater research is needed to truly help us understand the effects of secondary trauma on our campers. This may be a key factor to understanding a camper’s behavior, mental health, or the overall functionality of his or her family.

Stigma still exists when it comes to military-related injuries. Typically, when thinking of the service branches, phrases such as “Army Strong” come to mind. The warrior mentality doesn’t leave much room for anything perceived as weakness, and both service members and their families may feel they have a duty to uphold this perception. For example, a parent may not want to report that his or her spouse has PTSD for fear of it getting back to the spouse’s unit or costing that spouse a promotion. While many steps have been taken to eliminate this stigma, it still exists. When talking to parents, it is important that camps and their staff are educated about the effects of stigma and how it may impact parent and camper behavior.

Military families are constantly faced with change and uncertainty. On average, a mili-tary family will move six to nine times from when a child starts kindergarten through his or her high school graduation — about once every three years. The lives of mili-tary families are frequently disrupted by orders, with dates continually changing and constant uncertainty of the future. If there is one thing consistent across all mili-tary families, it is the reality that change is always just around the corner. Camp exists to combat that feeling of uncertainty and instability. Campers have an experience each summer that is familiar — one that often becomes an annual tradition for many families. Even if a camper moves from North Carolina to Arizona, he or she can still attend camp.

By 2016, an estimated 1.7 million children in the U.S. will have an injured, wounded, or fallen service member parent. Even though the Camp Corral program has experienced rapid growth over the past four years and has served more than 6,500 military children, there is still more work that all camps can do. Through intentional camp programing, kids can build supportive relationships with others, which will help them become more independent and resilient, skills that will directly benefit them as they grow up in military families. Even more crucial for this population, camp allows military kids to connect with others who can empathize and provide support for their situation. 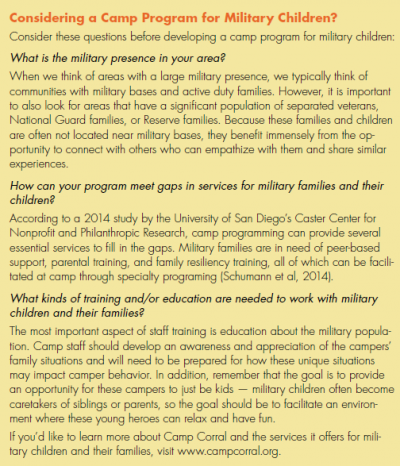 Department of Defense (2014) 2013 Demographics: A profile of the military community. Retrieved from www.militaryonesource.mil/12038/MOS/Reports/2013-Demographics-Report.pdf

Hannah Hutler serves as Camp Corral’s program and camps coordinator, working with Camp Corral’s 23 host camps to provide a week-of-a-lifetime experience for military children. Hannah grew up in a camp environment, and has been working with camps across the country for more than seven years. In 2012, Hannah began working with the military population at a camp outside of Fort Bragg in North Carolina, immediately fell in love with the population, and soon joined the Camp Corral team. She received her bachelor’s degree in youth programming and camp management from the University of Wisconsin-Stevens Point.

Tackle Your Camp Counselor Job with an Internship Mindset

After the Deluge — Part III: Letters from My Campers