All camp administrators want their business operations expenses to end up on the positive side of the budget ledger. However, many directors are unaware of how their expenses and revenues compare to other camps' business operations. Every three years the American Camp Association (ACA) collects this information in the ACA Camp Business Operations Survey. In the fall of 2014, we asked a 75-percent random sample of our ACA-accredited camps to share their business data for revenues, expenses, weekly registration costs, scholarships and discounts, and marketing techniques. The following highlights from their answers provide general insights into the business side of operating a camp, as well as break-outs based on camp type (day camp, overnight camp, or rental camp).

Revenue generation for any camp is a critical aspect of the business. Unless a benefactor supports the camp, the welcome sign will have to come down if the dollars aren't generated to support the program in a quality way. Many camps look for creative ways to generate income, but as expected, the majority of the revenue comes from camper registrations. The average camp's gross revenue in 2014 was $1.28 million with overnight camps realizing the highest revenues ($1.42 million) followed by rentals ($1.30 million) and day camps ($1 million).

Camps that indicated fee increases in 2014 compared to 2013 based them on: 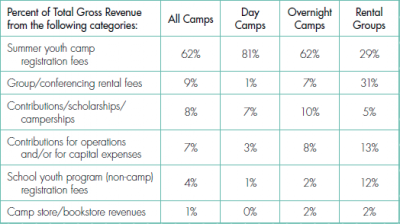 The other half of the camp ledger is focused on expenses incurred by the business. Ideally, camps look for ways to be cost-effective and thrifty when analyzing their expenses. Based on the information shared by directors, the average camp expenses in 2014 were $1.16 million but varied greatly by type of camp. For example, overnight camps average expenses were $1.3 million dollars, followed by rental camps ($1.27 million) and day camps ($790,000). 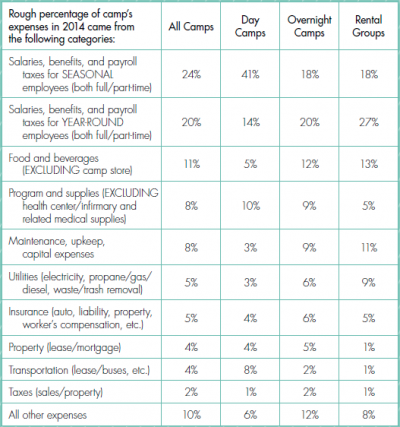 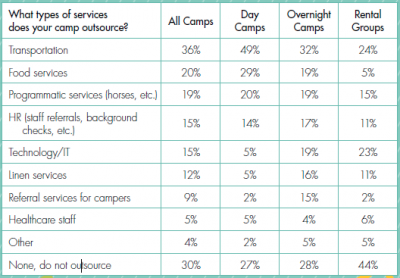 For some camps, scholarships are critical to their survival. For others, scholarships are a nice option to help more campers experience their program. The directors shared that the average total dollar value of scholarships awarded to campers in 2014 was $77,700 and resulted in about 24 percent of their campers receiving full or partial scholarships.

Some directors suggest that marketing is the key to operating a financially successful camp business. When asked, directors said their most successful marketing strategy by far was referrals by families and friends followed by social media, alumni, and their websites (see Table 4). 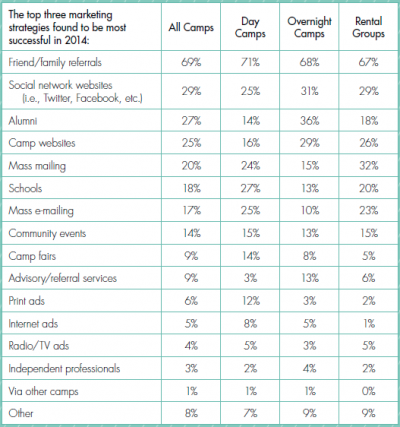 Lastly, camps were asked, "In which of these ways do you expect your camp business model to change in the next three years?" About one in four directors said they anticipated no change to their business model. Of those directors who thought they would

have changes, the most popular change was to expand their current offerings without adding programs, add school groups, add

other types of groups, add a day camp, or add a family camp program (see Table 5). 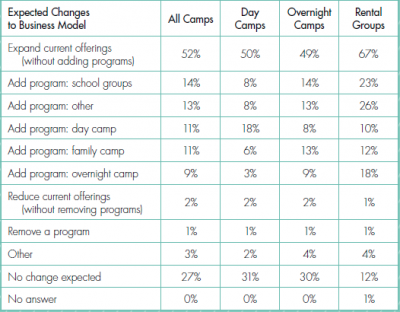 Understanding the business side of camp is critical to the success of most camps. Information shared through outlets such as the ACA Camp Business Operations Report: 2015 are full of information that can help camps benchmark their realities with other similar kinds of camps. While this article focused on comparisons by camp type, these reports offer additional breakouts by other camp characteristics such as sponsorship (agency, religiously affiliated, independent nonprofit, independent for-profit), geographic regions, revenue size, camper days, and profitability. The business operations' information shared by directors in this survey:

Hopefully, when asked to "show us the money," camp administrators can translate these facts and figures in a way that demonstrates the sound business acumen that results in quality programs, safe settings, and caring adults that turn dollars and cents into the experience of a lifetime. We gratefully acknowledge all of the directors who completed the business operations survey in 2014. For more information about the ACA Camp Business Report:2015, go towww.ACAcamps.org/research/improve/2015-business-operations.

Troy Bennett, MBA, is a graduate research assistant for ACA.

What Directors Want to Know about 2012 Summer Enrollment

Teaching the Skills That Children Need to Succeed