These are just a few of the actual situations faced by camps this year. These examples and many others were fielded by ACA's Camp Crisis Hotline team. The Hotline serves as third-party support for camps in crisis. While the Hotline team does not provide medical nor legal advice, they do help camps talk through their crisis and consider options for next steps. Hotline team members also provide callers with resources, strategies that have been successful in other camps experiencing similar crises, and sometimes simply a "listening ear" of support.

Since 1985, ACA's 33 years of providing resources to camps has helped create a service providing the information, tips, strategies, and other resources to those who phone the Hotline. 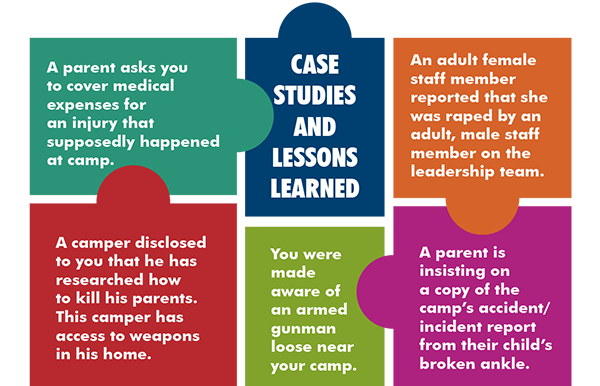 Annually, ACA provides a review of lessons learned based on Hotline calls received that year, case studies for you to use with your staff, and links to the resources that were found most useful. Previous years' annual reviews and other helpful resources are available on the ACA website's Hotline resource page. We hope you will use this review as a training tool for your staff and as a resource to help you prepare your own crisis management plans. Each year, we receive approximately 125 to 135 calls to the Hotline. This year, the calls fell into the following categories:

Health and Medical Issues — 26% of calls

This year there was an increase in calls about medication administration mishaps by healthcare and camp staff. For the third year in a row we received a high number of calls from camps needing assistance for mental health issues such as talk of suicide, cutting, eating disorders, and anxiety for both campers and staff. Many of the remaining health and medical calls ranged from questions about common childhood illnesses (whooping cough, chicken pox, etc.) and flu outbreaks to a few accidents with injury. In many of these calls, the camp did not have the healthcare expertise needed in the camp environment on staff or easy access to resources. Tragically, ACA was notified of two deaths through Hotline calls this summer.

While the ACA Hotline team is not comprised of legal or medical experts, we do have the experience to direct camps to the best information available. In addition, we partner with organizations such as the Centers for Disease Control and Prevention (CDC), the American Academy of Pediatrics, and the Association of Camp Nursing (ACN) to provide education and resources for the camp environment.

Allegations Of Child Abuse — 15% of calls

The percentage of calls related to business operations doubled over the last year. While many of these calls were not what we would describe as a "crisis" in nature, the Hotline team recognizes that in the moment the camp director makes the call to us, they are stressed and looking for resources. Business operations questions included a broad range of topics such as the use of applicable laws, international campers and staff issues, rental group issues, handling disgruntled former staff, incident and accident reports, and insurance questions.

Camper issues represented 12 percent of our Hotline calls this year, which is slightly lower than last year's 17 percent. Different from camper-to-camper abuse, this group of calls mainly focuses on an individual camper's behavior in general and not toward another specific camper. This category also includes concerns with campers who identify as gender diverse.

Bedbugs, bats, lice, scabies, pinworms, spiders, and ticks, oh my! Infestations is a new category of calls this year. In the past, this topic was part of the health and wellness category; however, as the occurrence of calls of this subject matter was often a significant portion of the category. we separated them.

Four percent of calls this year involved parent issues, which can be some of the most difficult issues for camps. Calls included both the actions of the parents of campers as well as the parents of camp staff. Sadly, we continue to have calls from camps where a parent refuses to pick up their misbehaving child who has been expelled from camp. As camps, you partner with parents, but sometimes it is the behavior of parents themselves that is the challenge.

The remainder of the calls concerned varied issues. These ranged from responding to natural disasters such as fire, flood, and tornadoes to rental group contracts and requests for standards and leadership resources. Two calls were related to community threats near the camp location — escaped convicts and an armed gunman. One call was related to guidelines for having service animals in camp.

The Camp Opportunity Now and in the Future

Mission, Vision, Values: Speaking to You, Speaking through You