On the job front, national employment reports are generally coming in positive, with some indication that salaries, wages, and benefits may be rising a little (see, for example, www.bls.gov). So how is this playing out in the camp industry? The American Camp Association’s 2016 Compensation, Benefits, and Professional Development Survey provides some insight.

Following are several highlights of the type of information that can be found in the report on survey results. Camp director profiles (selected from key administrative professional staff that included camp director, assistant director, maintenance director, food services director, and registrar/office assistant) are presented along with any changes in salaries that have occurred over the past year, as well as projected changes for the upcoming year. The key seasonal positions of camp counselor, lifeguard, and camp nurse, selected from over 20 seasonal staff positions, are also discussed, as are recent proposed changes to minimum wage laws and where to find information pertinent to your specific camp.

Camps in the Sample

When comparing salaries, the median is often considered a better indicator of a typical salary due to the influence that extremely high or low salaries exert on the average.

Almost 70 percent of overnight camps reported that salaries for full-time seasonal positions have increased over the previous year at an average rate of +2.6 percent. Counselors, lifeguards, and nurses have been selected here for illustrative purposes from over 20 seasonal staff positions typically found at camp. The median weekly wage for each position is as follows (table top right):

There were significant differences for nurses’ weekly salaries in overnight camps across camp ownership/sponsorship: agency, $500; religious, $535; independent not-for-profit, $975; and for-profit, $800.

Within day camps, 54 percent reported that salaries for full-time seasonal positions have increased +2 percent over the previous year. The median weekly wages are (table below right):

Other benefits included in the results are bonuses or incentive pay, retirement contributions, dental insurance, housing, life insurance, sick days and vacation, and professional development. The median cash value of benefits at both day and overnight camps ranges from $10,000 to $15,000. 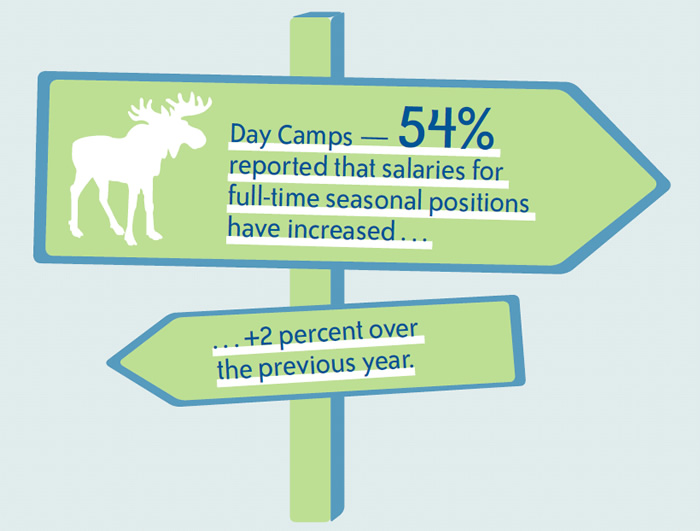 To get a better understanding of this complex issue, and to learn which employees qualify for exemptions from minimum wage and overtime provisions, ACA has developed an online resource. For details on federal exemptions from the Fair Labor Standards Act and state wage laws that may be more stringent, visit: ACAcamps.org/resource-library/public-policy/fair-labor-standards-act-applicability-camps.

The 2016 Compensation, Benefits, and Professional Development Survey provided detailed information from many camps across the country. In the full results report available from ACA, data can be evaluated across characteristics such as camp ownership/sponsorship, camp type, region of the country, and gross revenue size, as well as across individual characteristics of people in leadership positions such as gender, age, education, and tenure at camp. Full reports for overnight camps, day camps, or both are available.

Troy Bennett is a graduate research assistant for the American Camp Association.

Insurance 101: Your Insurance Policy — What Does it Really Mean?