Severe weather used to have a season. Now, severe weather can happen at virtually any time of the year. Camps need to be prepared.

The American Camp Association (ACA) standard OM.8 requires that a camp have site-specific emergency procedures established to appropriately respond to natural disasters typical of the area and other reasonably foreseeable emergencies. The “Contextual Education” for this standard goes on to state:

The phrase "natural disasters typical of the area and other reasonably forseeable emergenics" includes natural disasters such as storms, earthquakes, wildfires, and floods, as well as emergencies such as power outages and other local threats (e.g., train derailments, escaped prisoners, chemical/refinery plant issues, compromised drinking water, camp access restricted due to an emergency event occurring elsewhere).

It is important that camp leadership take the time now, in the pre-season, to identify potential emergencies and establish plans to deal with them. They might include severe storms (during any season) and the impact of such storms (flooding, wind or hail damage, etc.). Emergencies might also be those that deal with non-weather related situations, such as those described in the “Contextual Education” above.

As a camp prepares its emergency plans, some questions to ask include: 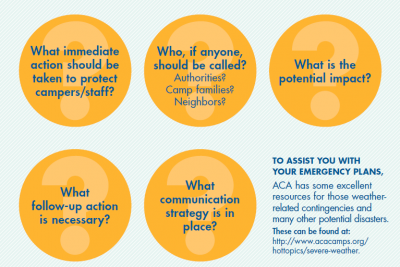 While this resource list will help you plan ahead, access to technology can also help a camp to be better prepared should the worst occur. Use of the NOAA radio, Doppler radar, and so­cial media allow anyone to have up-to-date forecasts of potential storms. Lightning detectors are now widely used by golf courses and swimming pools, and by some camps.

With the extremes in weather that many areas of the country have experienced, being prepared for anything is the best advice.