Since 1985, the American Camp Association® (ACA) has provided crisis support to camps through the confidential ACA Camp Crisis Hotline. This service is available 24-hours-a-day, every day of the year. Camps contact the Hotline to receive support, discuss options, or talk to an objective third party. While Hotline team members do not provide legal or medical advice, we can connect camps with the resources they need and help them think through their options. A review of the summer 2017 calls shows many trends, lessons learned, and case studies that are presented to assist camps in being prepared should a similar crisis occur at their camp. 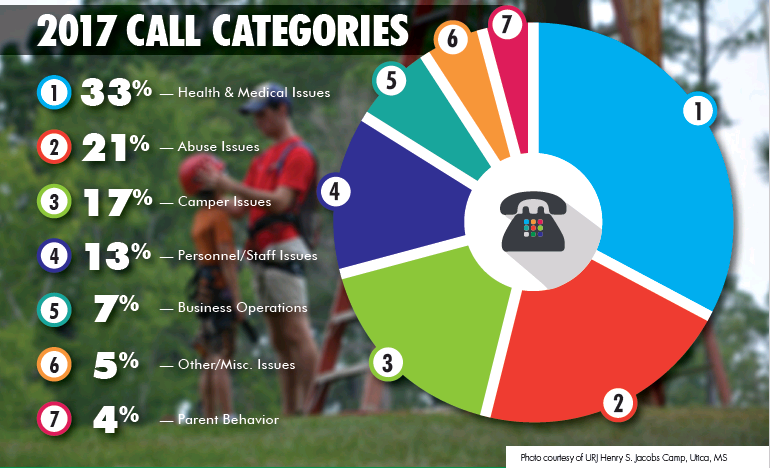 For the ninth consecutive year, the top category of calls was related to health and medical issues. This category comprises 33 percent of all the calls received in 2017.

While the ACA Hotline team does not contain medical or legal experts, we do have the experience to direct camps to the best information available. In addition, we collaborate with organizations such as the Centers for Disease Control and Prevention, the American Academy of Pediatrics, and the Association of Camp Nursing to provide education and resources for the camp environment.

The Health and Medical Issues category includes a broad range of topics from the treatment of common childhood illnesses (e.g., chicken pox) and infestations (e.g., bedbugs, lice, etc.), to questions about procedures (e.g., how to perform a lice check). Tragically, it also includes the ACA Hotline being notified of four fatalities this summer.

A common factor we have found in many of these calls is that many camps do not have healthcare staff who are familiar with common issues in a camp setting. Sometimes the questions we receive are regarding the laws related to healthcare at camp (e.g., "Who can distribute medications?", "Is my license accepted in this state?", etc.). In other cases, camps simply want to talk about the steps they have already taken, and want to benefit from talking with a third-party that can help them think about other questions or actions they might not have considered. 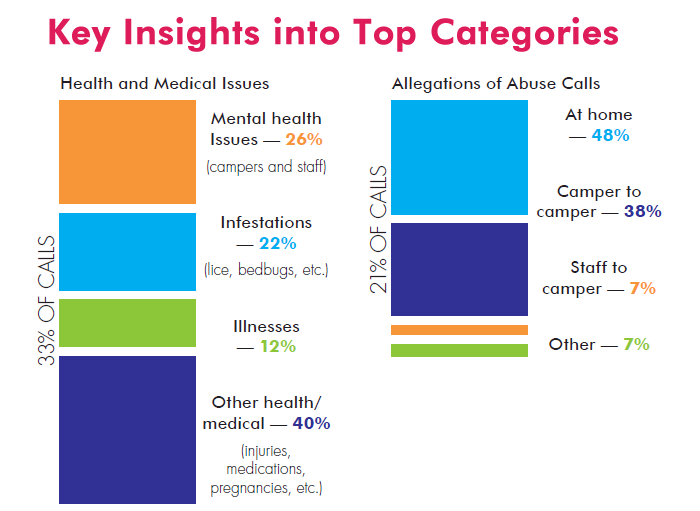 The 21 percent of Hotline calls related to allegations of abuse broke out into four categories.

Allegations of Abuse at Home (48 percent of abuse issue calls)
Children who are the victims of abuse or neglect at home (or some other place outside of camp) will sometimes disclose their abusive situation to a caring adult while at camp. Revelations by campers that they are being abused at home are very difficult to handle for any camp. When this occurs, camp directors have many questions about what to do and who to call.

Allegations of Camper-to-Camper Abuse (38 percent of abuse issue calls)
Hotline calls related to allegations of camper-to-camper abuse have shown a marked increase over the past few years, from 3 percent in 2014, to 11 percent in 2015, to 33 percent in 2016, to the current 38 percent. While many of these calls are to clarify mandated reporter laws and whether or not to call the authorities, often the conversation leads to identifying the need for techniques and tips to manage the way campers treat one another. As with allegations of abuse at home, allegations of camper-tocamper abuse must be reported to the proper authorities, who will then investigate the matter. Sometimes callers to the Hotline want advice on whether a specific situation is abuse or not. The ACA Hotline team cannot make that determination. Making the call to the authorities is the only way to ensure that you are handling any allegation properly.

Allegations of Staff-to-Camper Abuse (7 percent of abuse issue calls)
Seven percent of the abuse-related calls this summer were allegations of abuse of a camper by a staff member, ranging from inappropriate touching to inappropriate comments and verbal abuse of high school-aged campers. While the callers in this category understood and complied with mandated reporting laws, they often wanted to discuss policies, procedures, and staff training ideas to keep their campers safe.

Other Abuse Issues (7 percent of abuse issue calls)
The balance of the abuse calls this summer fall into an "other" category. Camper-to-Staff (camper was older with special needs) and a few general mandated reporter inquiries comprised calls in this category.

Calls related to camper issues rose from 10 to 17 percent of total calls over the last year. This category excludes allegations of camper-tocamper abuse, which was previously addressed in this article. Typically, this category focuses on an individual camper's behavior and concerns with campers who identify as transgender, gender nonconforming, or gender variant. This category also includes acts of bullying among campers.

Personnel-related calls accounted for 13 percent of the calls in 2017. In some cases, camps are simply looking for resources to hire an emergency staff replacement due to an unexpected resignation or termination. In other cases, camps are searching for resources to help them make legal decisions regarding the hiring or release of a staff person. However, many calls related to staff behaving inappropriately.

Seven percent of the calls this summer were about issues regarding the business of running camp. One camp was being investigated for a camperto- camper issue that had previously occurred at camp. Other callers had questions about taxes, wages, insurance, and workers' compensation. These calls typically concern questions about applicable laws, closing a camp, handling negative social media, international insurance considerations, legal counsel, liability questions, and risk and release waivers.

Miscellaneous questions comprised the remaining 5 percent of calls. These issues included handling a persistent intruder in the evenings on a camp's site, possible bedbugs coming to camp with campers that have them in their home, evacuating for a wildfire, answering questions about ACA's Standards, and discussing "hypothetical" questions. The most frequently referenced resources used by the Hotline team to answer these and other questions can be found online.

While only 4 percent of calls to the Hotline were regarding parent behavior, they continue to be some of the most difficult issues for camps. As camp professionals, we know we partner with parents, but sometimes it appears that parents are not agreeable to the partnership. In one example, divorced parents with shared custody of their child vehemently disagreed on the name and gender of the child who was attending camp. The child identified as transgender, and one parent supported the identity, while the other did not.

Insurance 101: Your Insurance Policy — What Does it Really Mean?

Impetigo: What Does It Look Like, and What Should You Do?

Changing the Framework of Abuse-Prevention Training